A funeral will be at 10 a.m. Wednesday at Calvary Baptist Church, with the Rev. Earl Swigart officiating. Interment will be in Forest Home Cemetery with military honors provided by Henry County Honor Guard.

Visitation will begin at noon Tuesday at Olson-Powell Memorial Chapel, where the family will be present from 5-7 p.m.

Memorials may be made to Great River Hospice House or Pleasant Manor Care Center.

Online condolences may be directed to www.olsonpowell.com.

Mr. MARTIN enlisted in the United States Army Oct. 13, 1942. He served in the 11th Armored Division and participated in the Battle of the Bulge during World War II. He was discharged in November 1945.

Following his discharge, Mr. MARTIN farmed in Missouri. In the late 1950s, he moved to Iowa, where he continued to farm. He also was employed by Harkens Meat Processing. In 1962, he moved his family to Fairfield, where he operated Dog-n-Suds. After three years in Fairfield, he moved his family to Mount Pleasant. Mr. MARTIN operated The Diner in Mount Pleasant and then was employed by Hazen Supply near Yarmouth until his retirement in the mid-1980s.

After his retirement, Mr. MARTIN enjoyed mowing grass for many of his neighbors and turned that hobby into a small business. He enjoyed watching the Food Network, cooking, trying new recipes and fishing.

Survivors include his wife; two sons, Larry MARTIN and wife Ruth of Fairfield and Craig MARTIN of Mount Pleasant; two daughters, Dianna WILLIAMS and husband Melvin of Mexico, Mo., and Janice RUSSELL and husband Jim of Burlington; one son-in-law, Tom UITERMARKT of Des Moines; two brothers, Ronald MARTIN and Ralph DRINKALL, both of Illinois; one sister, Kathleen NELSON of Indiana; 16 grandchildren; 25 great-grandchildren; and one great-great-grandchild.

He was preceded in death by his parents; one daughter, Judy UITERMARKT; one stillborn son, Stephen Ellis MARTIN; one brother, Berney MARTIN; and one sister, Annalee WELCH. 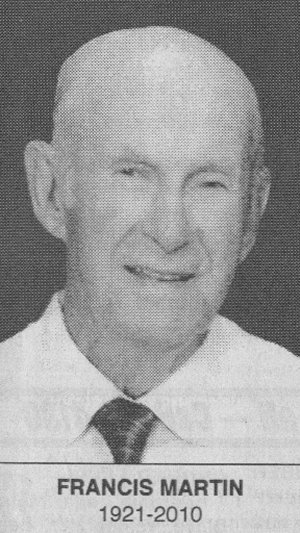