A funeral will be at 10 a.m. Monday at Pedrick Funeral Home in Douds, with the Rev. Dennis Hoffman officiating. Burial will be in Kilbourne Cemetery.

Visitation will begin at 1 p.m. Sunday at Pedrick Funeral Home in Douds, with the family present from 2-4 p.m.

Memorials may be made to the family, Good Samaritan Society-Van Buren or Kilbourne Cemetery. Memorials may be left at the funeral home or mailed to 13866 Highway 98, Douds 52551.

Mrs. KING graduated from Douds High School in 1947. She was a homemaker and helped her husband farm. She also worked at Moore Nursing Home in Stockport and as a cook at Douds School. She and her husband moved to Hanover, Pa., where they managed a horse ranch for a few years. After retirement, she spent part of her winters in Arizona.

Mrs. KING was a lifelong member of St. Aloysius Church.

She was preceded in death by her parents; three brothers, Kenneth, Harold and Joe KNECHT; and one grandson. 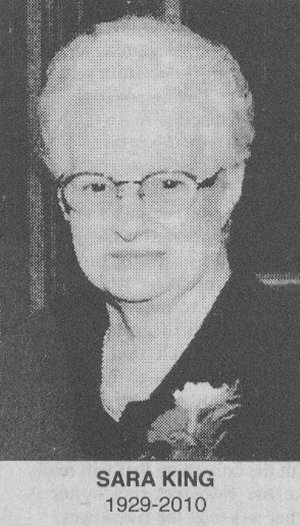