A funeral will be at 10 a.m. Wednesday at Raymond Funeral Home in Fairfield, with the Rev. Eric Reyman officiating. Interment will be in Batavia Cemetery in Batavia.

Memorials may be made to Hospice Compassus or Abingdon Church of Christ.

Online condolences may be sent at www.raymondfuneralhomes.com.

Mrs. KIEWS was born Dec. 26, 1919, at home near Batavia, the daughter of Martin L. and Eva Grace WHITMORE MILLER. She married Marvin KIEWS June 6, 1957, at The Little Brown Church in Nashua.

Mrs. KIEWS grew up in the Batavia community and graduated from Fairfield High School. She earned her normal training certificate from Parsons College and later took courses at Iowa Wesleyan College and Grundy Center. She was a schoolteacher in rural Jefferson County schools and a homemaker.

Mrs. KIEWS was a member of Abingdon Church of Christ.

Survivors include her husband; one daughter, Karen GRIDLEY and husband Jay of Blue Grass; one son, Bill KIEWS and wife Michelle of Batavia; six grandchildren; seven great-grandchildren; and two brothers, Dean MILLER and Robert MILLER, both of Batavia.

She was preceded in death by her parents; one brother, Richard MILLER; and one sister, Evelyn WARD. 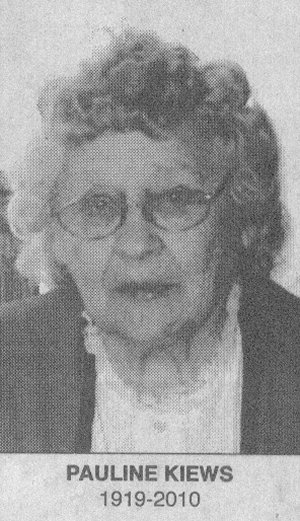