A memorial service will be at 10:30 a.m. Monday at First Baptist Church in Fairfield, with the Rev. Jim Wotherspoon. The body will be cremated.

In lieu of flowers, memorials may be sent to Mrs. SALTS-PARKER's family at 203 W. Jackson Ave., Fairfield 52556, or to Indiana University Foundation/Amyloid Research, in care of Dr. Merrill Benson at UISM 635 Barnhill Drive, Indianapolis, IN 46202.

Arrangements are in the care of Behner Funeral Home.

Survivors include her mother and stepfather, Carolyn and Kenneth HESTON of Ankeny; her husband, Steven PARKER of Fairfield; one son, Robert M. BROOKS of Fairfield; one step-daughter, Jennifer L. PARKER of Texas; stepson, Brad PARKER of Missouri; three sisters, Sheryl L. BURRIGHT of Ankeny, Katharine A. STOCKTON of Williamsburg and Roxanne POWER of Ollie; one step-sister, Kimberly S. SCHEIDT of South Dakota; one stepbrother, Kevin B. HESTON of Fort Madison; and one granddaughter.

She was preceded in death by her father; one son, Dustin C. POWER; one stepsister, Barbara L. ACHESON; and grandparents, Theodore and Wilma CASSABAUM and Clifford and Ora SALTS. 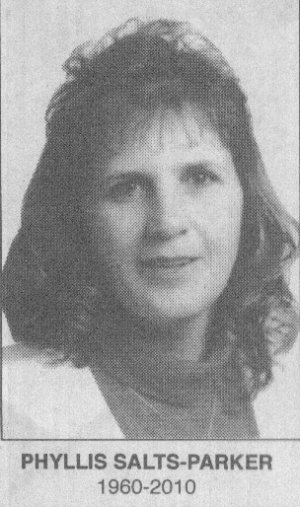