Burial will be beside her twin brother Larry at Dulaney Valley Memorial Gardens in Timonium, Md.

Following her marriage after World War II, Mrs. JONES moved to Broomall, Pa., and began a family. From there, the family moved to an old farmhouse outside Media, Pa. In addition to restoring the old farmhouse and barn, they raised horses, ponies, sheep, ducks, cats and dogs. From Pennsylvania, Mrs. JONES moved to Batavia to live near one of her four sons. She later moved to Cochranville, Pa., and lived near another son until the time of her death.

Mrs. JONES loved animals and the Eastern shore. She also enjyoed gardening and caring for her family.

She was preceded in death by four siblings, Walter Jr. "Junie," Maria "Peggy," Clarie "Hotsie" and her twin Larry "Bunky." 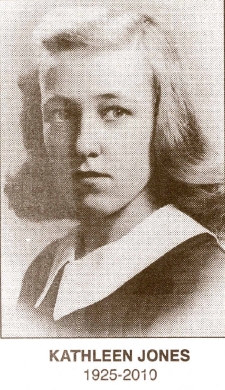