A funeral will be at 11 a.m. Saturday at First United Methodist Church in Mount Pleasant, with the Rev. Herbert Shafer officiating.

In lieu of flowers, memorials may be made to North Hill Cemetery Association in Wayland.

Arrangements are in the care of Ingersoll Chapel for Funeral and Cremation Services of Troy, Mo.

Online condolences may be left at www.ingersollchapel.com.

Mr. KAUFFMAN graduated from Wayland High School. The KAUFFMANs resided and farmed in the Wayland area. In 1961, they moved to Fairfield, where Mr. KAUFFMAN became sales manager for Danielson Motor Company. In 1977, he was honored as the National Sales Leader for Dodge corporation. He was also honored with membership in the Dodge Sales Manager's Society in 1984. The KAUFFMANs wintered in Florida, and Mr. KAUFFMAN moved into Elsberry Health Care Center in January 2010.

He was a veteran of World War II, having served in the United States Army.

Mr. KAUFFMAN was a member of First United Methodist Church in Mount Pleasant.

Survivors include his wife; two sons, Tom and wife Sandra of Troy, Mo., and Terry and wife Catherine of Brattleboro, Vt.; one daughter, Debra and husband David of Davenport; eight grandchildren; and five great-grandchildren.

He was preceded in death by his parents; two brothers, Dean and Ledru; one infant sister, Dorothy; and one infant granddaughter. 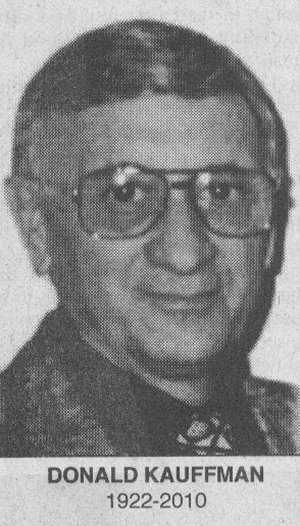