A funeral will be at 10:30 a.m. Monday at Behner Funeral Home in Fairfield. Burial, with military honors, will be in Memorial Lawn Cemetery.

Memorials may be made to Heartland Humane Society or to a charity of the donor's choice. Cards and memorials may be sent to 200 E. Kirkwood Ave., Fairfield 52556.

Mr. SCHRUM was born June 3, 1926, in Murdock, Neb., the son of Nicholas Carston and Martha May LONGSTRETH SCHRUM. He married Beverly ELMORE April 2, 1961, at Barhydt Chapel in Fairfield.

Mr. SCHRUM was raised in Manning and graduated from high school in 1944. He attended Cornell College in Mount Vernon and then entered the United States Army Air Force; he was honorably discharged in October 1946. He went on to graduate from Parsons College in 1951 and from the University of Iowa with a master's degree in European history in 1954. He later attended the University of Nebraska. Mr. SCHRUM taught at Shenandoah High School and Parsons College and then taught and coached at Packwood. He taught at Pleasant Plain, and in 1962, he began teaching at Fairfield, where he continued until his retirement. After his retirement, he taught at Indian Hills Community College and Buena Vista.

Mr. SCHRUM was chairman of the Jefferson County Service Committee for many years, and for 11 years, he served in the SHIIP Program, counseling Medicare recipients. He was a member of Elks Lodge No. 1192, American Legion 40-8, Veterans of Foreign Wars, Fairfield Clinton Masonic Lodge No. 15, Fairfield Shrine Club, Davenport consistory and KAABA Shrine. He was a 32nd degree Mason.

Mr. SCHRUM's hobbies included gardening and woodworking, which began with building his home. He also was interested in trains.

Survivors include his wife and one sister, Sally DONNELLY of Hills City, Kan.

He was preceded in death by his parents; one brother, Richard; and four sisters, Lilah KIMES, Lois KNUDSEN, Verna "Honey" GUNNERSONS and Leona LARSEN. 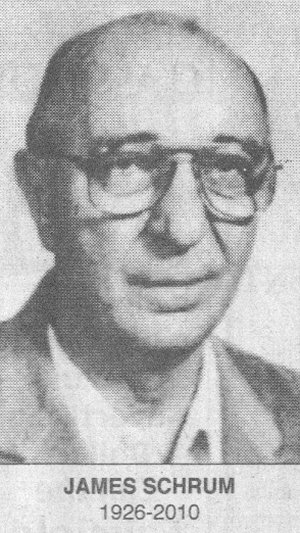