A celebration of life service will be at 11 a.m. Wednesday at Jones Eden Funeral Home in Washington, Iowa, with the Rev. Darryl Carr officiating. Interment will take place at a later date at Hillsboro Cemetery in Hillsboro.

Visitation will begin at noon Tuesday at the funeral home, where the family will be present from 6-8 p.m.

Online condolences may be sent through the Internet at www.jonesfh.com.

Mr. HAHN was born Feb. 26, 1936, in Unionville, Mo., the daughter of Lloyd and Dovie RUGGLES BRADSHAW. She married Ronald HAHN Sr. in 1954. They later divorced.

Mrs. HAHN attended grade school in Wellman and graduated from Washington High School. She lived in Jefferson and Henry counties with her longtime friend Edgar FRANKLIN. She worked at Advanced Ross Auto. She also was a home health care worker. She worked at United Presbyterian Home as an aide and assisted Mr. FRANKLIN in his salvage business for many years.

She was preceded in death by her parents; special friend, Edgar FRANKLIN; one son, Paul HAHN; one granddaughter; two brothers, Hollis "Doc" BRADSHAW and an infant; and two sisters, Ruth DUNSTON and Betty GREEN. 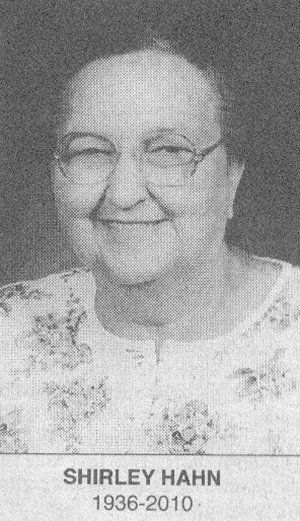