GANN, Sheryl DIMMITT -- Sheryl DIMMITT GANN, formerly of Fairfield, died in a head-on car accident Monday, March 8, 2010, as she drove to the school where she teaches in Franklin, Mo.

There will be a memorial service at the Prairie Home Methodist Church on Friday, March 12, at 5:00 P.M. Visitation will be for one hour prior to the memorial, from 4:00 o'clock (sic) until time of the service. Arrangements are under the direction of Davis Funeral Chapel, Boonville, MO.

Sheryl Kay GANN was born in Fairfield, Iowa July 15, 1944, the daughter of Glen DIMMITT and Erma SMUTZ. She married David GANN on April 3rd, 1993 in St. Joseph, MO. The family moved to Prairie Home in 1997 and became active in their church and in the community. Sheryl had taught school for many years in the St. Joseph, MO school district. She continued her special calling in the New Franklin Public School for thirteen years, until her death. She had many interests, including observing wildlife, especially birds as well as gardening. She was very active in her church. Her grandchildren were the light of her life.

A memorial service will be at 10:30 a.m. Saturday at First Presbyterian Church in Fairfield. Interment will follow in Memorial Lawn Cemetery in Fairfield.

Mrs. GANN is the daughter of Glen "Bud" and Erma DIMMITT.

A full obituary was published in the March 10, 2010, Fairfield Ledger. 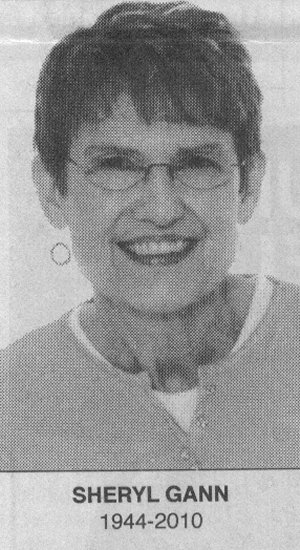