A memorial service will be at 3 p.m. Sunday at Kingdom Hall of Jehovah's Witnesses in Fairfield, with Lother Lengtat officiating. The body has been cremated. Burial will be at a later date at Oakland Mills Cemetery.

Family visitation will be from 1-3 p.m. Sunday at the hall.

In lieu of flowers, memorials may be made to the Worldwide Work of Jehovah's Witnesses.

Online condolences may be sent to www.olsonpowell.com.

Mrs. HANSEN grew up in the Quad Cities and graduated from Moline High School. She attended Monmouth College. She and her husband lived in Rock Island, Ill., and Iowa City and in 1966, moved to Henry County. Mrs. HANSEN worked as a secretary for the McClellan Company in Davenport. In 1970, she and her husband moved to Mount Pleasant, where she worked as a secretary for Hansen Instruments.

Mrs. HANSEN was a Jehovah's Witness; she enjoyed Bible study and teaching the Bible.

She enjoyed spending time with her family, traveling and attending Christian conventions.

Survivors include her husband; and one daughter, Marcie of Mount Pleasant.

She was preceded in death by her parents; one son, Joe HANSEN; and one brother, Walter CONGDON Jr. 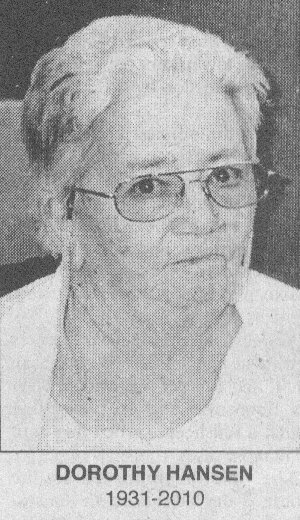