A memorial service will be at 1 p.m. Friday at Runge Mortuary and Crematory in Davenport. Burial will be in National Cemetery in Rock Island, Ill.

A second memorial service will be held at a later date at Mount Moriah in Arbela, Mo.

Visitation is from 5-7 p.m. today at the mortuary.

In lieu of flowers, memorials may be made to Shriner's Children's Hospital. Online condolences may be sent at RungeMortuary.com.

Mr. NELSON graduated from Memphis High School in Memphis, Mo., in 1960. He worked as a union carpenter for Priester Construction for 25 years and then worked for Robertsons Builders until his retirement.

He was a member of Fraternal Lodge No. 221, AF&AM, American Legion Post No. 26, Elks Lodge and Carpenter Local Union No. 4. He was a 32nd degree Master Mason through Scottish Rite of Free Masonry and a 33rd degree Shriner.

He enjoyed napping, watching westerns, sitting on the deck watching and feeding hummingbirds, spending time with his dogs and visiting friends at Bleyart's Tap.

Survivors include his wife; three sons, Brian and wife Lisa of Bettendorf, Chad and wife Heather of Ankeny and Jeff NELSON of Davenport; three daughters, Lisa METCALF and husband Jim of Fairfield, Kathryn CLARK of Altoona and Tracy MILLER of Des Moines; 11 grandchildren; and two great-grandchildren.

He was preceded in death by his parents and one brother, J.D. NELSON. 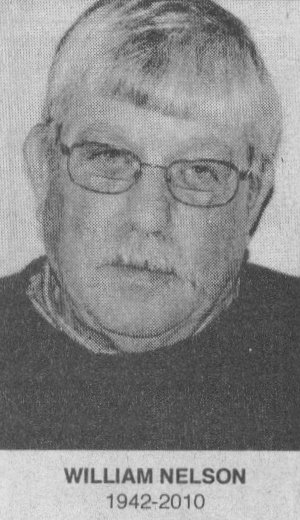