Kathryn Floris was born the daughter of Pearl and Nettie (NEUHART) JOHNSON on November 29, 1915 in Des Moines, Iowa. She grew up on the family farm near Fairfield, Iowa.

She graduated from Fairfield High School and attended Parsons College. Kathryn taught in a one room school house near Limby for over 4 years. Later, she was employed at Collin's Radio in Cedar Rapids for over 15 years until her retirement. She then moved to Monticello.

She was a past member of Kenwood Park Presbyterian Church. Kathryn had a fondness for horses and vegetable gardening. She enjoyed going fishing with her husband, Elmer.

She was preceded in death by her parents, her former husband Leland E. NELSON and her late husband Elmer W. DREXLER, her brother Joe JOHNSON, her sister Helen KITCHEN and her grand-daughter, Elise MARTIN.

The Koepsell Funeral Home and Cremation Services in Beaver Dam is serving the family. Online condolences for Kathryn's family may be made at www.koepsellfh.com .

A memorial service will be at 10 a.m. Saturday at First Presbyterian Church in Farifield, with te Rev. Joe Phipps oficiating. Interment will be in Memorial Lawn Cemetery in Fairfield.

Family visitation will follow interment Saturday at the home of Wade and Janet Roberts.

Arrangements are in the care of Raymond Funeral Home in Fairfield. Online condolences may be sent care of www.raymondfuneralhomes.com.

Mrs. DREXLER was born Nov. 29, 1915, in Des Moines, the daughter of Pearl and Nettie NEUHART JOHNSON.

Mrs. DREXLER grew up on the family farm near Fairfield. She graduated from Fairfield High School and attended Parsons College. She taught in a one-room schoolhouse in Linby for more than four years. Later, she was employed at Collins Radio in Cedar Rapids for more than 15 years until her retirement. She then moved to Monticello.

She was preceded in death by her parents; her former husband, Lelane E. NELSON; her husband, Elmer W. DREXLER; one brother, Joe JOHNSON; one sister, Helen KITCHEN; and one granddaughter. 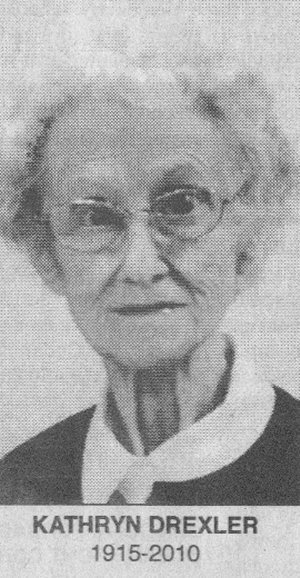