A Mass of the Resurrection will be at 10:30 a.m. Saturday at St. James Catholic Church, with the Rev. Paul Appel officiating. Interment will be at Elm Grove Cemetery in Washington, Iowa.

Visitation will begin at noon Friday at Jones-Eden Funeral Home in Washington, Iowa, where the family will be present from 6-8 p.m. A Catholic Daughters Rosary will be at 5 p.m. Friday at the funeral home, followed by a prayer service at 5:30 p.m.

A memorial has been established to St. James Parish.

Online condolences may be sent through the Internet at www.jonesfh.com.

Mrs. LUKAVSKY graduated from Springdale High School in Springdale, Iowa. She was a homemaker and also worked for Iowa City Domestic Services and United Presbyterian Home.

Mrs. LUKAVSKY was a member of St. James Catholic Church, where she was active in the Altar and Rosary Society. She also was a member of Catholic Daughters. She was a former member of the Y Women and Walnut Women's Club. 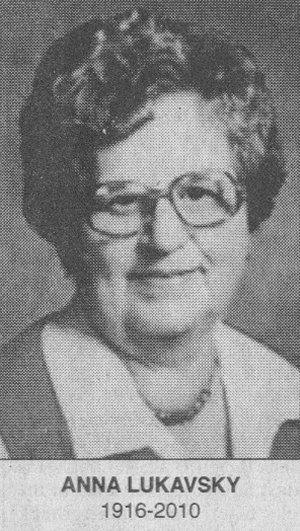