A brief service will be at 10 a.m. Tuesday at Olson-Powell Memorial Chapel in Mount Pleasant, followed by a procession to Lockridge Cemetery for the graveside committal, with the Rev. Gary Van Nyhuis officiating.

Visitation began at noon today at the memorial chapel, where the family will be present from 5-7 p.m.

A memorial has been established to the American Diabetes Association.

Online condolences may be directed to www.olsonpowell.com

Mrs. OLDENBURG-GRAF spent her formative years in Washington state. She was a homemaker and worked on the farm. She came to West Point in 1981 as a horse breeder. For the past 25 years, she had made her home in Lockridge.

Mrs. OLDENBURG-GRAF was a member of the American Rabbit Breeder's Association and was a registered judge for the organization. 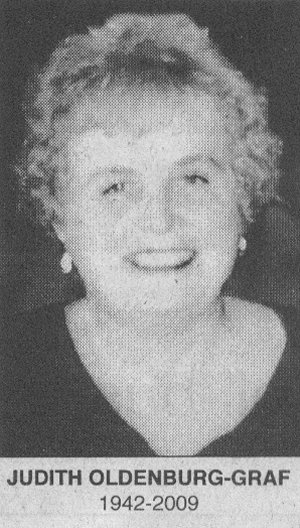