ANDERSON, Pearl May -- Pearl May ANDERSON, 94, of Fairfield, died Friday, Nov. 6, 2009, at University of Iowa Hospitals and Clinics in Iowa City.

A service will be at 10 a.m. Wednesday at Behner Funeral Home in Fairfield, with the Rev. Dave Peterson officiating. Interment will be in Memorial Lawn Cemetery.

Cards of sympathy and memorials to Veterans of Foreign Wars Ladies Auxiliary may be sent to PO Box 1863, Fairfield 52556.

Mrs. ANDERSON was employed as a housekeeper at Parsons College and as a cook for the Elks Lodge, Walton Club and Fairfield Country Club.

In addition to her husband, she was preceded in death by her parents; one daughter, Shirley KELLER; one granddaughter; three brothers, Leo, Harold and Clarence; and four sisters, Helen, Hazel, Irene and Ethel. 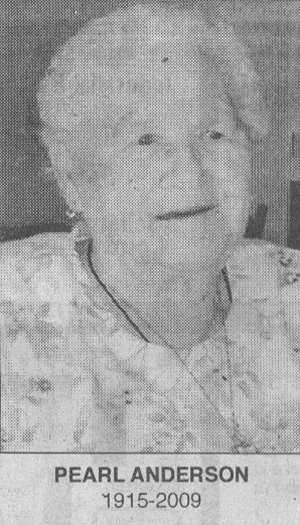