Friends may pay their respects to the family Tuesday,September 22, 2009 at the First Lutheran Church in Fairfield between 6:00 and 8:00 PM.

Funeral services will be held Wednesday morning, September 23rd, at 10:30 at the church, with Pastor Phil Barker officiating. His body will be cremated and inurnment will take place at a later date.

The family requests memorials be made in lieu of flowers to the First Lutheran Church of Fairfield, or the Genkinger family. Cards of sympathy to the family and memorials may be sent c/o:
604 E. Monroe
Mt. Pleasant, IA 52641.

John was a member of the Iowa National Guard Band from 1962-1969, where he performed the cymbals. He taught high school English from 1969-1976 at both Winfield High School and Fairfield High School, and he also coached and was an activity advisor.

John then worked for 20/20 Place as the first licensed optician in the state of Iowa. In 1989, he opened Eyeowa Optical Company where he was dedicated to providing the most pleasant and thoughtful service.

John was a member of the First Lutheran Church in Fairfield. He volunteered much of his time through organizations like The Greater Jefferson County Foundation, Special Olympics, Lockridge Township Trustee, his local church council, and he served six years on the SE Iowa Synod Council of the ELCA.

John was united in marriage with Claudia WESTON in Fairfield on August 9, 1969. They are the parents of three children: Robert, Genelle and Matthew. He and Claudia made their home in Mt. Pleasant for the past 11 years. John will be remembered for his great sense of humor, his passion for education and his generous giving spirit. He will be deeply missed by his family and the entire Fairfield community.

John is survived by his beloved wife, Claudia, of Mt. Pleasant, IA, and their children and their families: Robert and Lisa GENKINGER of Fairfax, VA, Genelle and Chad NETLAND of Bemidji, MN, and Matthew and Tara GENKINGER of Centreville, VA. John was blessed with six grandchildren: John, Faith and Ella GENKINGER, Catherine and Jake NETLAND, and Frank GENKINGER. Survivors include three sisters: Linda and Gary BONNETT of Palm City, FL, Pamela and Lee HERDMAN of Ridgedale, MO, and Martha CHARLES of Clive, IA.

He was preceded in death by his parents, sister Susan, and an infant brother, William. 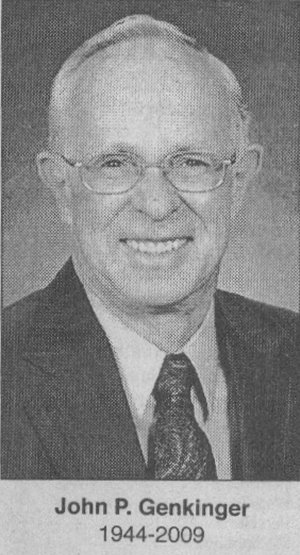