A service will be 2 p.m. Friday at First Christian Church (Disciples of Christ) in Fairfield, with the Rev. Suzanne Swahn officiating. Interment will be at Memorial Lawn Cemetery in Fairfield.

Visitation will be from 6:30-8 p.m. Thursday at Raymond Funeral Home.

Memorials may be made to First Christian Church or Hospice.

Mrs. JEFFREY was born Feb. 7, 1914, near Libertyville, the daughter of Harvey and Isabelle WILSON LOUTH. She married Ralph E. JEFFREY June 22, 1935, in Fairfield. He preceded her in death.

Mrs. JEFFREY was a graduate of Batavia High School. She and her husband lived in Batavia and Packwood before moving to Fairfield in 1948. She worked at Fairfield Glove before retirement.

Mrs. JEFFREY was a member of First Christian Church, where she taught Sunday school for many years and was one of the first ladies to be elected an elder of the church. She also belonged to the Eagles Auxiliary and was a past president.

In addition to her husband, she was preceded in death by her parents; three grandchildren; and one sister, Mildred BABCOCK. 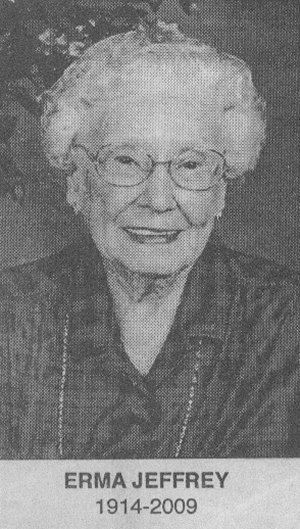