A funeral will be at 10 a.m. Friday at Behner Funeral Home in Fairfield, with the Rev. Rick Fielder officiating. Burial will be in Memorial Lawn Cemetery in Fairfield.

Visitation with the family will be from 6-8 p.m. Thursday at the funeral home.

In lieu of flowers, memorials and cards to the Shirley Jean BRADLEY family may be sent to PO Box 133, Libertyville 52567.

Mrs. BRADLEY lived in Fairfield for the last four years, with prior residence in Libertyville for 45 years. She and her husband owned and operated S & J Ceramics in Libertyville from 1972 to 1993.

She was of Baptist faith.

In addition to her husband, she was preceded in death by her parents; one son, Danny Joe BRADLEY; one son-in-law; three sisters, Evelyne BARBER, Zeralda BARBER and Beverly WINTERS; two brothers, John BARBER and Robert BARBER; and one grandson. 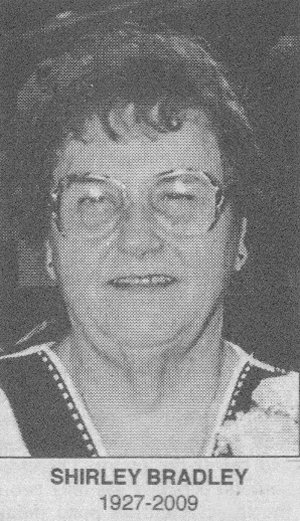