Funeral Mass will be held 11:00 A.M., Tuesday, December 23 at St. Mary Catholic Church, Fairfield. The Rev. Stephen Page will officiate at the service. Interment will be at Memorial Lawn Cemetery, Fairfield. Friends may call one hour before service at the church. The Raymond Funeral home is in charge of arrangements.

Eugene SHEMANSKI was born March 3, 1930 at Pleasant Plain. He was the son of Peter and Stella WENCIL SHEMANSKI. Gene graduated form (sic) Fairfield High School with the class of 1948. He served his country in the US Army from 1951 to 1953. Gene worked at Collins Radio in Cedar Rapids from 1955 to 1969 and then worked at Rockwell-Collins in Fairfield from 1969 to 1992. He also farmed south of Libertyville. In 2002 he sold the farm. He was a member of St. Mary Catholic Church in Fairfield.

He was preceded in death by his parents and an infant brother Raymond.

Memorials may be given in Gene's name to the Polishville Community Center C/O Bill Peck 1157 Raspberry Ave. Brighton, IA 52540. 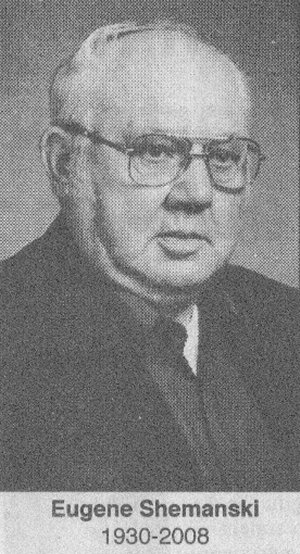