Visitation will begin after 12 noon, on Tuesday, September 16, 2008, at the Olson-Powell Memorial Chapel of Mt. Pleasant, where the family will greet friends from 5:00 to 8:00 p.m. that evening. Funeral services will be held at 10:30 a.m., on Wednesday, September 17, 2008, at the First United Methodist Church of Mt. Pleasant, with The Reverend Bettyanna Bremer officiating. Burial will be in the Lockridge Cemetery. Memorials have been established to Great River Hospice House and American Cancer Society. On-line condolences may be sent to www.olsonpowell.com.

The son of Otto F. and Marjorie E. BLUCHER GRAF, Larry Everett was born October 3, 1942, in Fairfield, IA. He was a 1960 graduate of Fairfield High School, attended Parsons College, and spent most of his life in the Lockridge and Rome area. After college Larry became an iron worker. In 1972, he founded Hawkeye Erection Company which still operates today.

Larry enjoyed his work and was a member of the Iron Workers Union, Local 577 in Burlington, IA. In his spare time he liked boating and fishing. He also enjoyed socializing with friends and was an avid Cubs fan.

Larry was preceded in death by his parents and a son, Robert GRAF. 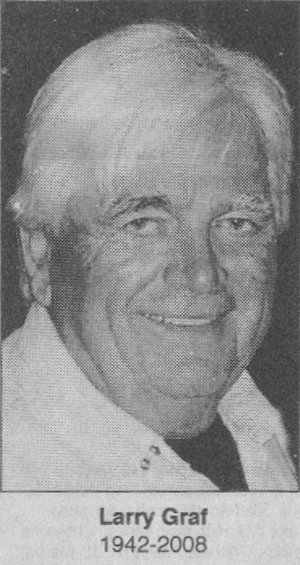