Born December 13, 1923 near Fairfield, she was the daughter of Carl J. and Maude KRUMBOLTZ ANDERSON.

She lived most of her life in the Salina - Fairfield area. She was a graduate of Fairfield High School and the Burlington College of Nursing.

Marjorie was a registered nurse and worked at the Jefferson County Hospital until her retirement in 1982.

She married Alfred BARTLETT Jr., he is deceased. She married Richard Dean RUSSELL on September 28, 1963 at the Salina Presbyterian Church. He preceded her in death on December 30, 1983.

Marjorie was a member of the Salina Presbyterian Church and the First Christian Church of Fairfield; the Jefferson County Hospital Auxiliary, the Northside Strippers Quilt Club, the Eagles and V.F.W. auxiliaries and the Elks. Marjorie served in the Army Nurses Corps during World War II. After retirement she worked at the Hospital Auxiliary's Bargain Box and volunteered for various organizations.

She was a loving, kind, positive role model for her family and friends.

She loved quilting, crafts, staying healthy, dancing, traveling, cribbage, but most of all she loved her God, her family and her friends.

Funeral services are scheduled for 1:00 P.M. Tuesday, February 27th at the Salina Presbyterian Church with Reverend Keevin Koch officiating, assisted by Reverend Clarence Anderson. Interment will be in the Salina Cemetery.

The family will receive friends on Monday from 6:00 until 8:00 P.M. at the Raymond Funeral Home in Fairfield.

A memorial has been established in Marjorie RUSSELL's name. Arrangements are in the care of the Raymond Funeral Home in Fairfield. 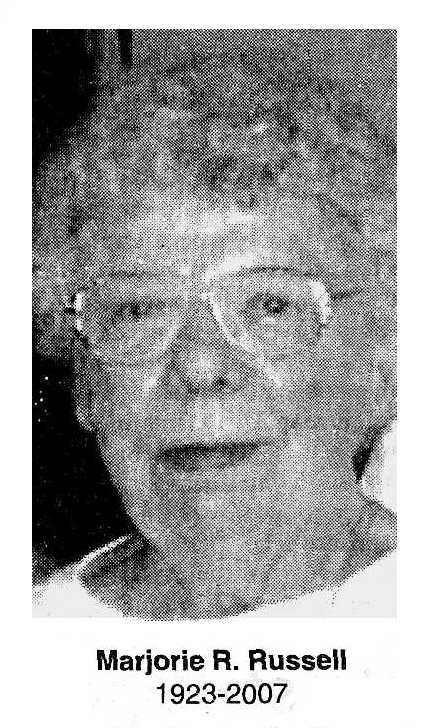