She was born Dec. 23, 1924, in rural Boone county, daughter of Verl and Llyra Friedrich. She married Alvin Lindaman on June 4, 1953. He preceded her in death.

She graduated from high school in Rockwell City 1942 and graduated from George Peabody College in Nashville in 1946 with a degree in education. The couple farmed north of Wellsburg until 1968. She taught at Wellsburg Public Schools for nearly 20 years. She worked at the lumber yard, was head librarian for the Wellsburg Public Library and had a column in local newspapers. She was a member of East Friesland Presbyterian Church.

Memorials: may be directed to Wellsburg Public Library, East Friesland Presbyterian Church of Ackley, the Wellsburg Historical Foundation or the charity of the donor's choice. 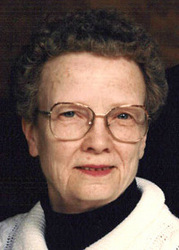