Gertrude Neymeyer, 89, of Dubuque, Iowa, formerly of Waterloo, died Thursday, November 1, 2007, at the Stonehill Care Center in Dubuque. Gertrude was born August 24, 1918 in Buck Grove, Iowa, the daughter of Ecko & Florence (Deters) Mennen. She married Benjamin A. Neymeyer October 7, 1937 at the West Friesland Presbyterian Church parsonage. He preceded her in death December 27, 2003.

Gertrude was preceded in death by her husband; one daughter, Sherryl Eilderts; three grandchildren, Mark, Gary and Karen Eilderts; one sister, Florence Janssen and one brother, Gordon Mennen.

Services will be 11:00 a.m. Tuesday, November 6, 2007, at West Friesland Presbyterian Church with interment in the church cemetery, rural Ackley, Iowa. Visitation will be from 5:30 to 7:30 p.m. Monday at the Dahl-Van Hove-Schoof Funeral Home in Cedar Falls, and for one hour before service time at the church on Tuesday. Memorials may be directed to the church or Hospice of Dubuque. 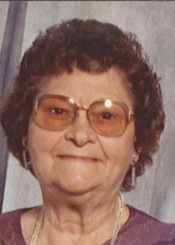