Frieda was born February 21, 1920 to Sievert and Reka (Eckhoff) Muller in Holland, IA. Frieda was united in marriage to Loyd Wesley Mast on January 10, 1940 at the Colfax Center Presbyterian Church , in Holland, IA. She was employed at the Grundy Hospital as a nurses aid, Skogmos in Grundy Center. She also babysat and cleaned houses for a number of families. Primarily she was a homemaker. Family was important to her, and she was always willing to help others whenever she was needed. 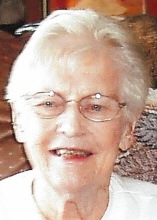