Jerry Richard Schryver, son of Delos Schryver and Margaret Stout, was born January 18, 1921 in Liscomb, Iowa. He graduated from Gladbrook High School. Jerry served in the Army Air Corps, training pilots to fly. After WWII, he returned to Iowa State University and finished his degree in Aeronautical Engineering. He was married to Wilda Isbell on May 14, 1944 in Oklahoma City, Oklahoma. Three sons were born to them: Rusty, Mark and Matt. Jerry moved to Conrad with his family in December, 1952 and took a job as General Manager of Green Products Company. He purchased Green Products in 1972 and remained active in the business until well after retirement. He lived in Conrad until his death. He was a member of the United Methodist Church of Conrad, the American Legion, founding member of the Lions Club in Conrad, and founding member of the Oakwood Golf Course. He served on the school board for Conrad schools, and was actively involved in building the Conrad pool. He will be remembered for his passion for teaching, quick sense of humor, and compassion for all. 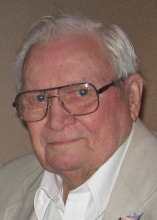