Marlys Dielschneider, 89, of Conrad, IA passed away Sunday, June 14, 2015, at the Iowa River Hospice Home, in Marshalltown. Visitation will be from 5:00 p.m., to 8:00 p.m., Wednesday, June 17, 2015 at Conrad United Methodist Church. Funeral services will be 11:00 a.m., Thursday, June 18, 2015 at Conrad United Methodist Church with Reverend Gene Kubli officiating followed by a luncheon. Interment at the Conrad Cemetery will follow the luncheon. The Conrad Chapel of Anderson Funeral Homes has been entrusted with these arrangements.

Marlys was born December 3, 1925, the daughter of Leslie and Daisy (Hudspeth) Kline, in rural Grundy County, IA. She graduated from Conrad High School and then attended Iowa State University, graduating with her B.A. in early childhood development. Marlys was united in marriage to Willard Dielschneider on October 2, 1949 at her parents home in rural Conrad. Marlys owned, operated and taught Conrad Community Nursery School for 18 years. Marlys was an active member of Conrad United Methodist Church and active behind the scenes in her community. 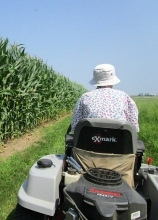