Richard was born and raised on the family farm in rural Beaman, Iowa to Thomas M. and Maude E. (Lepley) Lynch. He graduated from Beaman High School with the class of 1942 and in 1944 at age 18 enlisted in the Army Air Corp. He was stationed in England with the 44th Bomb Group as a tail gunner on a B24 completing 33 missions during his World War II service. After the war in Europe he returned to farming until retirement. He grew corn for Lynks Hybred for many years and also did custom combining.

In 1946 Richard was married to Betty Lou Hughes at the Alice Church of God in rural Conrad. They were blessed with 3 daughters, 3 granddaughters and 2 great-granddaughters.

Richard enjoyed sports and played a lot of baseball and basketball in high school and beyond. Other interests were golf, fishing in Minnesota, cards with the guys, and community volunteering.

Memorials may be directed to the Beaman United Methodist Church, or the BCLUW Sports Department. 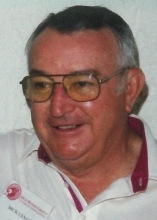