Nathaniel Charles "Chuck" Bownes, 89, of Morrison, passed away on Sunday October 11, 2015 at his home in Morrison while under Care Initiatives Hospice. A funeral service will be held on Thursday, October 15th at 10:30 a.m. at the Engelkes-Abels Funeral Home in Grundy Center. Visitation will be held on Wednesday, October 14th from 5 to 7 p.m. at the Engelkes-Abels Funeral Home. Burial will follow the funeral service at the Washington Township Cemetery. Memorials may be directed to the family.

Chuck was born on July 20, 1926 in Athelstan, Iowa, the son of Fred & Ida (Rusco) Bownes. He grew up in Athelstan, later moving to Reinbeck with his family. In 1950, Chuck began proudly serving his country in the United States Army during the Korean War. He was honorably discharged in 1952. On September 1, 1961, Chuck was united in marriage to Betty Hummel at the Presbyterian Church in Morrison. The couple welcomed son David and daughter Debra, into their family. He worked for the Ford Garage in Reinbeck and later worked for the Grundy Ford Garage. He also worked for Paton Bros. Trucking, Phelps & Rewerts and retired in 1986 from the Grundy County Highway Department.

He was a member of the Reinbeck American Legion. Chuck was a hard worker his whole life. He will be greatly missed by his family he leaves behind.

He was preceded in death by his parents; sisters Josie Mills & Minnie Schult. 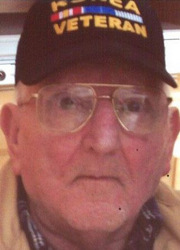