John A. Mumm "Bud", 85 of Waterloo, formerly of Hudson, passed away on Monday, October 19, 2015 at the Cedar Valley Hospice Home in Waterloo. Visitation will be held on Thursday, October 22, 2015 from 9:30 a.m. until time of memorial service at 10:30 a.m. at the United Methodist Church in Hudson. Burial will be held at the Reinbeck Cemetery at 1:00 p.m., with military honors conducted by the Reinbeck American Legion Action Post #242. In lieu of flowers memorials may be directed to the United Methodist Church of Hudson or Cedar Valley Hospice.

Bud was born on the family farm near Voorhies, Iowa on August 5, 1930 to his parents Charles and Bertha (Mastain) Mumm. He attended Reinbeck High School. After high school he assisted on the family farm and several other farms in the area. Bud enlisted in the United States Army and served his country from 1951-1953. Bud was married to Loretta Vangorp, Loretta passed away in 1979. He was united in marriage to Millie Raske on April 18, 1981 at the Little Brown Church in Nashua, Iowa.

Bud was a farmer and owned and operated his own corn shelling business. Bud retired from farming in 1995. He then was employed as a courtesy person for 21 years at the Hy-Vee College Square; his last day at work was August 11, 2015.

Bud was a long-time member of the United Methodist Church of Hudson. He was also a member of the American Legion. Bud was very honored to be apart of the Honor Flight to Washington D.C. in May of 2014. Bud loved the outdoors. He enjoyed camping and spending time with his family, especially his grandchildren.

He is survived by his wife Millie of Waterloo; his daughter Linda (Dave) Leeper of LAOS (Southeast Asia); his granddaughters Jennifer, Elizabeth, and Grace; step-granddaughter Emily; brothers Wibur Mumm of Hudson and Garry (Avon) Mumm of Albany, OR; sisters LaVonne Kerr and Marlys Keith both of Hudson and Charlene (Herb) Begley of Russell Springs, KY; sisters-in-law Margaret Mumm and Bev Mumm; and many nieces and nephews.

He was preceded in death by his parents; his daughter Nancy; brothers Leonard, Richard "Dick", Kenneth and Raymond Mumm. 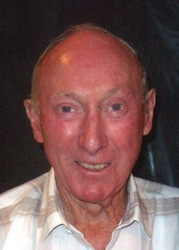