Marjorie June was born November 13, 1931, in Gladbrook, Iowa the daughter of Fred F. and Mabel (Neiderman) Chesick. Marjorie grew on a farm south of Reinbeck. She attended school in Dinsdale. On November 15, 1949, she married Edward Frank Harms in Reinbeck, IA. The couple lived in the Evansdale, Hudson and Reinbeck areas. Marjorie and Ed owned and operated Harms Processing Plant in Reinbeck. She was a lifetime member of Amity Presbyterian Church where she was an elder. Marjorie moved to Parkview Manor Nursing Home in March of 2015.

Marjorie loved playing Yahtzee, fishing, camping, her pets, Fluffy and Tipper and was the best cook around. She especially loved spending time with her family. 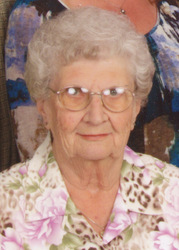