Esther J. Heeren, 89, of Grundy Center, passed away on May 7, 2015 at the Grundy County Memorial Hospital Long Term Care Unit while under Care Initiatives Hospice. A funeral service will be held on Monday, May 11th at 10:30 AM at the Colfax Center Presbyterian Church in rural Holland. Visitation will be held on Sunday, May 10th from 4 to 7 PM at the Engelkes-Abels Funeral Home in Grundy Center. Burial will follow the service at the church cemetery.

Esther Janet (Ennenga) Heeren, daughter of Eilt & Kate (Eckhoff) Ennenga, was born January 12th, 1926 in Colfax Township near Holland, Iowa. Esther attended country school in Colfax and Lincoln Townships. After graduating from the 8th grade, she worked for several families. She also worked at the Grundy Canning Factory in Grundy Center and also for Pioneer Seed in Reinbeck.

On February 18, 1948, she was united in marriage to Jake Heeren at the Colfax Center Presbyterian Church parsonage. Esther and Jake farmed near Stout, Wellsburg and later lived and farmed 28 years in Colfax Township.

Esther enjoyed helping Jake with the farming and tending to the chickens and livestock. She planted and tended to a big garden every year until she was unable to, due to her health. Esther enjoyed sewing, mending, latch work and quilting.

Esther and Jake retired in 1991 and moved to Grundy Center. In 2006, Esther moved to Parkview Manor in Reinbeck and relocated to the Grundy County Memorial Hospital Long Term Care Unit in 2008.

She was a lifetime member of the Colfax Center Presbyterian Church near Holland where she was active in the Women's Missionary Society, taught Sunday school and Catechism. Esther was very dedicated to the church over her lifetime and spent many hours with helping cleaning the church, assisting in the kitchen for weddings, Mission Feast and funerals. Esther sent many anniversary, birthday, get well and sympathy cards over the years and continued this after she was in the nursing home.

Esther enjoyed her visits with her family and her grandchildren and her family gatherings with her brothers and sisters. 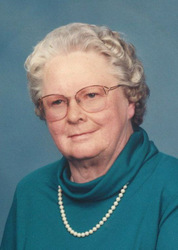