Carroll Hugh Haren was born July 13, 1926, in rural Grundy County, Iowa, son of Claus and Reka (Arends) Haren. He attended school in Grundy Center. On August 23, 1944 Carroll was united in marriage to Darleen Ralston in Waterloo, Iowa. He served his country honorably in the U.S. Navy. Carroll and Darleen made their home in Palermo Township where they farmed until retiring to Grundy Center in 1991. 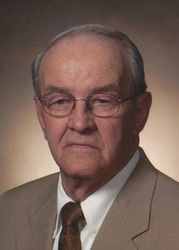