Mildred V. Knaack, 96, of Reinbeck, Iowa, died Monday, April 20, 2015, at the Grundy County Memorial Hospital Long Term Care Unit in Grundy Center, Iowa. Funeral services will be held at 10:30 A.M., Thursday, April 23, 2015, at Union Congregational United Church of Christ in Reinbeck, Iowa, with Rev. Joel Love officiating. Burial will follow at the Reinbeck Cemetery in Reinbeck. Visitation will be Wednesday, April 22, 2015, from 4:00 P.M. to 7:00 P.M. at French Hand Funeral Home in Reinbeck. Memorials may be made to the family.

Mildred Viola Rickert was born the daughter of Herman and Emma Ella (Karlsen) Rickert on August 20, 1918, in rural Luverne, MN. She was raised and attended school in Luverne area until 1928 when the family moved to a farm near Reinbeck, Iowa. She graduated from Reinbeck High School in 1936 and then attended normal training at The Teachers College (UNI) where she received her teaching certificate.

On January 7, 1940, Mildred was united in marriage to Ralph (Pat) Knaack at Union Congregational United Church of Christ in Reinbeck, Iowa. Mildred helped Pat with their farming operation and she cooked, cleaned and raised their two children and upon their retirement in 1974 they moved to the town of Reinbeck. She was a member of Union Congregational United Church of Christ where she taught Sunday school and was active in Merry Makers, Ladies Aide, and Abigail Circle. She was a member of the Eastern Stars for 50 years.

She was preceded in death by her parents; husband; three brothers, Orville, Bill, Jim, and one sister Florence. 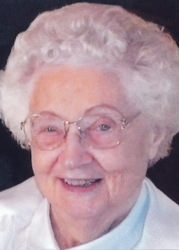