Gusta Mae McIntyre, 87, of Reinbeck, Iowa passed away on Wednesday, April 1, 2015, at the Manor Care in Waterloo while under the care of Unity Point Hospice after her courageous battle with cancer. Funeral services will be held on Wednesday, April 8, 2015, at 10:30 a.m. at The First Presbyterian Church in Reinbeck. Visitation will be on Tuesday, April 7, 2015 from 5 pm until 7 pm. at French-Hand Funeral Home in Reinbeck. Burial will follow at Washington Township Cemetery in Morrison. Memorials may be directed to the family.

Gusta Mae was born on January 28, 1928 the daughter of Knut and Nora (Christianson) Bratteig in rural Marshalltown, Iowa. Gussie attended Burr Oak School and graduated from Marshalltown High School in 1945.

On August 4, 1946 she was united in marriage to Donald McIntyre. He left us on January 31, 2001 and they are now united again for eternity. They were blessed with three sons.

She loved her family, sewing, knitting, camping, ceramics and crocheting. Gussie and Don wintered in Mesa, Arizona and enjoyed fishing in Minnesota. She was a member of The First Presbyterian Church and American Legion Auxiliary both in Reinbeck.

She was preceded in death by her parents; husband Donald; son Jack; grandson-in-law Shaun Quick; two infant grandsons, Andy and Lee, brother; Arnold; sisters, Martha and Alice and many brothers-in-law and sisters-in-law. 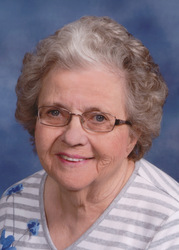