Eloise M. Brandt, 79, of Reinbeck, Iowa passed away on Thursday, September 23, 2010 at Allen Memorial Hospital in Waterloo while under the care of Cedar Valley Hospice. Funeral services will be 10:30 A.M., Monday, September 27, 2010, at First Presbyterian Church in Reinbeck, Iowa, with Reverend Michael Campbell officiating. Burial will follow at the Reinbeck Cemetery in Reinbeck, Iowa. Visitation will be Sunday, September 26, 2010 from 5:00 P.M. to 7:00 P.M. at French Hand Funeral Home in Reinbeck. A memorial fund has been established.

Eloise was born June 7, 1931 in Marshalltown, Iowa to her parents Elke and Mary Henricks. She attended country school in Grundy County. Eloise was married to her first husband Alvin Giesking and they had three children together. They later divorced and she was remarried to her husband Bud on December 20, 1960 in Conrad, Iowa. They then welcomed two more children into their family. Eloise and Bud were married 49 wonderful years until she lost Bud on January 25, 2010.

Eloise began her working life as the owner of the Downtown Café in Reinbeck. She then went on to work at Plastronics in Grundy Center for many years. Eloise then began working as a custodian for the Reinbeck Schools. She held that position for 22 years. She loved her job especially being around the children. Eloise was a member of the Elizabeth Rebekah Lodge # 444, I.O.O.F. of Reinbeck, Iowa. She was an avid bowler, belonging to a bowling league many years ago. She was known locally for providing the noodles for the Rebekah Lodges chicken noodle suppers. She loved to read and to do puzzles. Eloise volunteered her time to her neighbors and friends by chauffeuring them to their doctor appointments and other various errands. She loved her yearly family trips to Docs Lodge in Leech Lake, MN. She was a long time member of the First Presbyterian Church and served there as a Deacon and gave much of her time to church activities. She will be missed and long remembered by her friends and family. 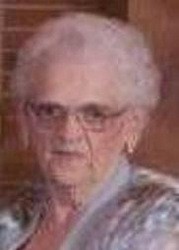