Robert Leland Thede, age 87, of Reinbeck, Iowa passed away on January 1, 2013 at Allen Memorial Hospital in Waterloo, Iowa. A funeral service will be held at 10:30 a.m. on Saturday, January 5, 2013 at the Union Congregational United Church of Christ in Reinbeck. Burial will follow at the Reinbeck Cemetery. A visitation will be held from 4:00 p.m. until 7:00 p.m. on Friday, January 4, 2013 at the French-Hand Funeral Home in Reinbeck. Memorials may be directed to the family.

Robert was born on June 15, 1925 in Reinbeck, Iowa, the son of Herman R. and Hilda A. (Claussen) Thede. He graduated from Reinbeck High School with the Class of 1942. Robert was united in marriage to Lucille Frey on January 26, 1947 in Traer, Iowa. They welcomed three children into their family. Robert loved to farm and did so on the family farm his entire life.

Robert was the Secretary and Treasurer for the Hudson Cooperative Dairy Association for 20 years. He was a member of the UCC Board of Trustees, a member and former president of the Merry Makers Sunday School Class and a member and contributor to the Izaak Walton League from 1941 to the present day. Robert was an avid bowler but his true joy in life came from spending time with his family especially his beloved grandchildren and great-grandchildren.

He was preceded in death by his parents; grandson Matthew Thede and brother Wayne Thede. 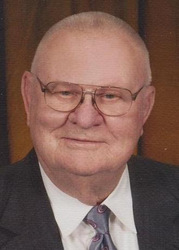