Marge was born on March 4, 1924 in Grundy Center, Iowa, the daughter of L.E. and Mary (Bicket) Stark. She graduated from Grundy Center High School with the Class of 1942. Marge was united in marriage to Elmer Dan Fritzel on April 3, 1946 at the Little Brown Church in Nashua, Iowa. Together they welcomed their daughter Mary Elizabeth into their family. Marge held various positions during her lifetime, such as, an employee of Hinson Manufacturing in Cedar Falls, Iowa, she worked on occasion for H.O. Fischer as a receptionist, and she was employed by VanDeest Meat Processors in Wellsburg for 25 years until her retirement.

Marge is survived by her daughter Mary (Charlie) Block of Ackley, Iowa; granddaughters Kristine Block of Anchorage, Alaska and Tracie (Bryan) Klassen of Rochester, Minnesota; great-granddaughters Rylee and Tayte Klassen; many nieces and nephews and friends.

She was preceded in death by her parents; husband Elmer; sisters Gladys Verly, Evelyn Heltibridle and Grace Akin; brothers William and Richard Stark. 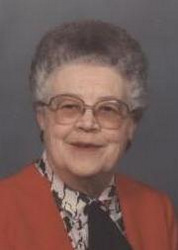