Dale H. Stumberg, 88, of Dike, passed away on Friday, January 11th, at Faith Lutheran Home in Osage. A funeral service will be held on Tuesday, January 15, 2013, 10:30 a.m. at the United Methodist Church in Dike. Burial will follow at Lincoln Center Cemetery. A visitation will be held on Monday, January 14, 2013, from 5 p.m. to 7 p.m. at Engelkes-Abels Funeral Home in Dike. Memorials may be directed to the family.

Dale was born the son of Joe and Lena (DeBerg) Stumberg on June 9, 1924, in Grundy County, Iowa. He graduated from Dike High School in 1942 and resided in the area most of his life. On October 23, 1948, Dale was united in marriage with Elaine B. Dewner in Lewiston, MN.

Dale farmed for over 51 years before retiring in 2004. He then moved to Ridgeway Place in Waterloo and for the past year, resided in Osage near his daughter, Pam, at Faith Lutheran Home. Dale was a member of Dike United Methodist Church. Singing, visiting and spending time with family and friends, and watching Iowa Hawkeye sports brought him great joy.

He was preceded in death by his wife Elaine in 1995; his parents; one infant daughter, Karen in 1962; infant grandson, Nyles, in 1990; and three sisters, Margaret, LaVerne, and Lois. 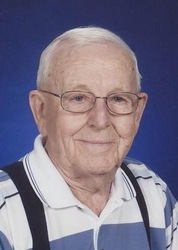