For 20 years, Elaine lived with and overcame blindness. She was able to learn braille and marked everything in her home for her to live alone & independently.

She enjoyed sewing, embroidering and crocheted baby blankets. Elaine enjoyed nick knacks and loved to collect things. She was an avid coin collector and also collected things all the way from stamps to spoons. Elaine also loved the time she spent with her husband Ralph. The two enjoyed fishing together and traveling to visit friends, family and Air Force friends Ralph & Elaine had made along the way.

She also enjoyed researching genealogy on her side of the family until she was no longer able to do so. 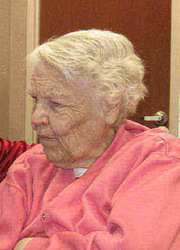