Shirley Ann Sells, 77, of Grundy Center, passed away on Wednesday, February 6, 2013 at the Grundy County Memorial Hospital Long Term Care Unit in Grundy Center while under the care of Cedar Valley Hospice. All services will be held privately by the family.

Shirley was born on April 30, 1935 in Fairfield Township, Grundy County; the daughter of Louie and Paula Sells. She was raised in Grundy County and graduated from Grundy Center High School with the class of 1954. Shirley retired from HyVee Grocery Store after more than fifteen years of service. She was a member of the American Lutheran Church. Shirley loved embroidering and taking care of the animals on the farm when she was young. She enjoyed people, and her true joy in life came from spending time with her friends and family.

Shirley is survived by her mother Paula of Grundy Center; brother Paul (Carol) Sells of Grundy Center and nieces Pamela Sullivan of Denver, Colorado and Tiffany Gabbard of Vista, California.

She was preceded in death by her father; sister Linda Gabbard and nephew David Sells. 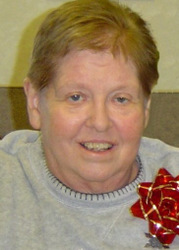