Grace Jesse Bausman, age 98, of Aplington, Iowa, was born the daughter of Charles and Laura (Ross) Bartz, on May 29, 1913, in Chickasaw County, near Ionia, Iowa. She received her education from a rural country school near her home.

On September 7, 1944, Grace was united in marriage with Wayne Bausman at the parsonage of the Trinity United Methodist Church, Wellsburg, Iowa. They made their home and farmed near Wellsburg. Wayne passed away nine years later in 1953. Through the years Grace did housekeeping for the elderly for 32 years and then worked at the Western Home in Cedar Falls, Iowa for 16 ½ years and retired at the age of 67.

She was a member of the Pleasant Valley United Methodist Church, rural Wellsburg. Grace loved to bake and spend time with her family especially with her grandchildren. In her later years she enjoyed taking many bus trips throughout the United States also including a trip to the Panama Canal. She enjoyed visiting with the residents at the Assisted Living Apartments in Cedar Falls and with many who worked at Hy-Vee.

Grace died Tuesday, March 20, 2012, at the Maple Manor Village in Aplington, of natural causes. She was preceded in death by her husband, Wayne; one son, Doyle Wayne Bausman; parents; and one grandson, Howard Wayne Bausman.

Funeral Services will be 10:30 a.m. Friday, March 23, 2012, at the Pleasant Valley United Methodist Church, with burial at the Church Cemetery, both rural Wellsburg, Iowa.

Visitation will be 1 hour prior to services at the Church. 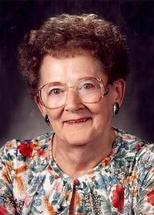