Hilda was born May 11, 1923, in Colfax Township, Grundy County, Iowa, the daughter of John S. and Henrietta (Smit) Dirks. She graduated from Grundy Center High School. On June 16, 1944, Hilda was united in marriage to Claus "Bud" Janssen at Colfax Center Presbyterian Church in rural Holland, Iowa. Hilda and Claus were dairy farmers for many years in rural Wellsburg.

Hilda was a member of First Christian Reformed Church, rural Wellsburg. She enjoyed being outside and taking care of her lawn and her garden on the farm.

She was preceded in death by her parents; her husband Bud in 1998; one son Donald Janssen; one grandson Blake Janssen; one brother John Edward Dirks; three sisters Harriett L. Janssen and two sisters in infancy. 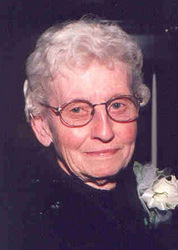