John B. Janssen, 90, of Wellsburg, Iowa, died Wednesday, June 15, 2005, at the Presbyterian Village in Ackley, Iowa, of natural causes. Funeral services will be at 10:30 a.m., Saturday, June 18, 2005, at the First Christian Reformed Church rural Wellsburg with Pastor Tom Vos officiating. Burial will follow in the church cemetery. Visitation is from 6:00 p.m. to 8:00 p.m. on Friday at Doyen-Abels Funeral Home in Wellsburg, where the family will be present to greet friends. A memorial fund has been established.

John was born November 30, 1914, in Eldora, Iowa, son of Will and Ada (Ruter) Janssen. He attended country school and graduated from Wellsburg High School in 1932. On June 28, 1949 he was united in marriage to Harriett L. Dirks. John farmed west of Wellsburg and raised purebred Hereford cattle. In 1970, John retired from farming, and in 1983 John and Harriett moved from the family farm west of Wellsburg into the town of Wellsburg. He was a lifelong member of the First Christian Reformed Church and served several terms on the Consistory. He was also a founding member of Timothy Christian School and a member of the Farm Bureau for many decades. John received much joy spending time with his many nieces, nephews, great and great-great nieces and nephews.

Preceding him in death was his wife, Harriett on July 20, of 1998; his parents; sister, Janet Williams; brother, C.A. "Bud" Janssen; brother-in-law, J. Edward Dirks; and a sister in infancy. 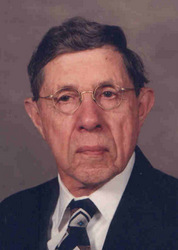