Oldig "Ollie" Haupt, 92, of Wellsburg, Iowa, died from natural causes on Saturday, May 7, 2005 at the Grundy County Memorial Hospital in Grundy Center, Iowa. Funeral services will be at 10:30 a.m. Wednesday, May 11 at the First Christian Reformed Church located west of Wellsburg. Burial will follow in the church cemetery. Visitation is from 6:00 to 8:00 p.m. on Tuesday at Doyen-Abels Funeral Home in Wellsburg. Memorials may be directed to Timothy Christian School or to the mission of your choice through First Christian Reformed Church.

Oldig was born December 4, 1912 in rural Wellsburg, son of Obo and Swantje (Nederhoff) Haupt. He attended country school near Wellsburg and on September 21, 1937 was united in marriage to Lillian Bakker at the parsonage of First Christian Reformed Church. Oldig farmed his entire life near Wellsburg and in 1982 moved into Wellsburg. He has spent the last 3+ years at the Grundy County Memorial Hospital Extended Care Unit.

Oldig is survived by children, Ruth (Henry) Vande Voort of New Sharon, Melvin (Arlene) Haupt of Wellsburg, Doris (Laverne) Klingenberg of Holland, Michigan, and Raymond (Cheryl) Haupt of Eldora; and by 16 grandchildren, 35 great-grandchildren, and one great-great-grandson.

He was preceded in death by his wife, Lillian on November 30, 1994; his parents; sisters, Anna Bunger, and Grace Haupt; and brothers, August and Henry Haupt. 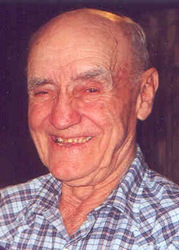