Harriett was born July 23, 1921 near Dike, Iowa, the daughter of Harm and Emma (Saathoff) Boike. She worked at Rath Packing Company in Waterloo for thirty-six years, retiring in 1983.

Harriett was preceded in death by her parents, a brother, Herman Boike, and a sister, Mabel Henningsen.

Private inurnment will be at Elmwood Cemetery, Dike, Iowa, at a later date. 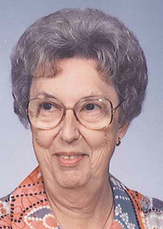