Kathryn J. Andreessen, 88, of Gladbrook, formerly of Parkersburg, died Wednesday, March 31, 2010, at Westbrook Acres in Gladbrook. She was born June 20, 1921, the daughter of George and Fannie (Hinders) Eilers at Stout, Iowa. She married Harlan Andreessen October 19, 1936 at Stout. He preceded her in death May 29, 1985. Kathryn and her husband farmed and owned Andreessen Livestock and Trucking for many years, retiring in 1973.

She is survived by one son, Larry Bob Andreessen, of Austin, Minnesota; two daughters, Carol Jeanne (Ralph) Meewes, of Melbourne, Florida, and LuAnn Andreessen, of Cedar Falls; eight grandchildren and sixteen great-grandchildren, and one sister, Tena Molendorp, of Parkersburg. 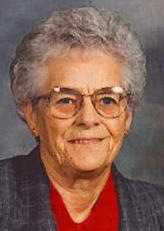