She was born May 14, 1915, in Titonka, daughter of Cecil and Blanche Seavey Filer. She married Walter Zech, and he preceded her in death.

She was a homemaker and managed the pet department for FW Woolworth in Fort Dodge.

Preceded in death by: her husband; a son, Ronald Eugene; a grandson, James Scott Zech; two sisters, Doris and Norma; and her parents, Cecil and Blanche Filer.

Memorials: may be directed to the Kavanagh House Hospice, Des Moines. 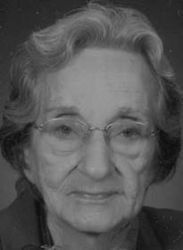