Robert Smith, 81, of Sunrise Hill Care Center in Traer, and formerly of Reinbeck, died Thursday, September 16, 2010, at Covenant Medical Center, Waterloo. Bob donated his body to the University of Iowa Medical School. There will be no visitation. A celebration of life event will be held at a later date for the family. Memorials may be directed to the Alzheimer's Association.

Bob was born January 11, 1929, in Charles City, Iowa, son of Harry and Mary (Maehrlein) Smith. He married Norma Staack on June 10, 1951, in DeWitt, Iowa. He graduated from Cedar Falls High School in 1946 and from Iowa State Teachers College in 1951. He served in the US Army from 1952-1953, and was stationed in Germany. He was a general contractor and realtor in the local area, and farmed near Hudson until his retirement in the mid 1970s. Bob enjoyed gardening, feeding and watching the birds and other wildlife, woodworking, and time spent with his family at their cabin in Minnesota.

Preceded in death by: his parents; his brother, Harry, and sister-in-law, Gladys (Kiefer) Smith of Cedar Falls. 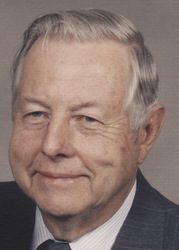