Nancy A. Kirkdorffer, 49, of Rural Conrad, Iowa, died at her home on Sunday, September 12, 2010 while under the care of her family and Care Initiative Hospice. Following cremation, memorial services will be held at 4 pm, Thursday, September 16, 2010 at the Conrad United Methodist Church in Conrad with Pastor Jennifer Daniel officiating. In lieu of flowers memorials may be directed to Nancys family. Creps-Abels Funeral Home in Eldora is in charge of the arrangements.

Nancy was born February 4, 1961 in Marshalltown, Iowa, daughter of Clifford D. Wilson and Maxine P. (Buss) Wilson. She was raised and educated in Conrad graduating in 1979. On September 7, 1998 Nancy was united in marriage to Brian Kirkdorffer at their home in rural Conrad. Nancy was employed as a print shop attendant for United Suppliers of Eldora. She enjoyed the outdoors, gardening, doing yard work, working with her four horses, and just watching the birds and butterflies. Nancy was also an avid NASCAR and Tony Stewart fan. 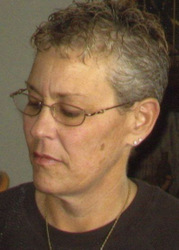