Ferne Robertson, 94, of Reinbeck, Iowa, died Saturday, September 11, 2010, while under the care of Iowa Hospice at Parkview Manor Nursing Home in Reinbeck, of natural causes. Funeral services will be 10:30 A.M., Wednesday, September 15, 2010, at First Presbyterian Church, Reinbeck, Iowa. Burial will follow at Washington Township Cemetery, rural Morrison, Iowa. Visitation will be Tuesday, September 14, 2010, from 5:00 P.M. to 7:00 P.M., with the family present to greet friends, at French Hand Funeral Home in Reinbeck. In lieu of flowers, memorials may be directed to Parkview Manor Nursing Home in Ferne's name.

Ferne was born June 15, 1916, in Berlin (Lincoln), Iowa, the daughter of Johannes D. and Anna Katherine (Schulz) Wollesen. She graduated from Reinbeck High School in 1933. On August 11, 1937, Ferne was united in marriage to Raleigh Harold Robertson at her parent's home in Lincoln, Iowa. After their marriage, they resided in Reinbeck for four years. In 1941, they moved to the farm one mile south of Reinbeck. Ferne was a homemaker while her children were growing up. She later became administrator of Parkview Manor in Reinbeck for 14 years. In 1998 they moved to town and made Reinbeck their home. Harold and his wife Ferne shared seventy-one years of marriage together. Ferne was an active member of First Presbyterian Church in Reinbeck where she was a member of the Faith Circle and Presbyterian Women's Group. Ferne was a 49 year member of P.E.O. chapter DQ of Reinbeck. She loved to cook and bake for family and friends. Time spent with her family was the most important thing to her. 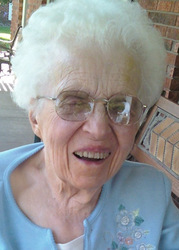